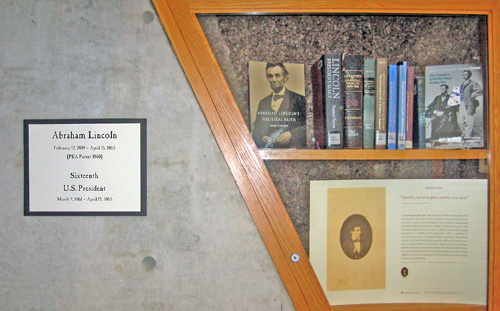 Come by the library to see our current exhibit honoring the anniversary of Abraham Lincoln’s visit to his son at Exeter in March 1860.   On display are a selection of books and photographs illustrating a few of the many facets of Lincoln’s life:  the frontiersman, the family man, the inventor, the politician, the Commander-in-Chief, champion and defender of the vulnerable and oppressed.

Included in the exhibit is a letter from Robert Todd Lincoln to his mother, written December 2, 1860, shortly after his father’s election as U.S. President.  On a visit back to Exeter during his first year at Harvard, Robert wrote, “Dear Mother – You see I am back at Exeter and I feel very much at home…..Tonight we are out to tea which will wind up our fun, as we have to commence study again tomorrow.”  He fills her in on other general news and continues, “I have a couple of friends from St. Louis who are going to the inauguration after vacation is over and I have invited them to stop at our house on their road.”

Balancing studies and social life, inviting classmates home for a visit – in some ways life at Exeter has changed very little over the past 150 years!

Also on display are commemorative postage stamps and coins on loan from members of the Academy community and photographs of Exeter-born Daniel Chester French and his work, which included the famous seated statue in the Lincoln Memorial in Washington, DC.  One of French’s first public commissions was the Minute Man Statue in Concord, Massachusetts; later in his career he sculpted others whose names are well-known locally including entrepreneur and philanthropist Ambrose Swasey, lawyer and politician Amos Tuck, and lawyer and statesman Daniel Webster (PEA Class of 1796).

The Lincoln exhibit will be on display through the month of April.