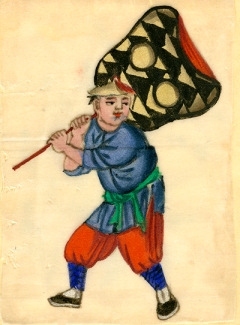 Anyone who has ever watched even just one episode of the Antiques Road Show knows that people collect or save all kinds of things.  Over time, the Academy Library has had many unusual and interesting things donated to us  that people, usually loyal and generous alumni, collected or saved, sometimes from their Exeter days, or just because the liked it.  The new Library exhibit, Out of the Dark, into the Light, arranged by Ed Desrochers, features a selection of unusual things from the library’s many collections.

The west case on the main floor contains items from our numerous special collections: a record on papyrus from the 3rd – 6th Century A.D., examples of miniature books, a collection of Chinese gouache paintings on pith paper,  a ceramic Chinese funeral procession, a group of illuminated manuscripts,  her majesty Queen Victoria’s seal in wax, a knife from the winter palace of Czarina Maria Alexandrovna, and commemorative medals from the time of Napoleon.

The east Case displays a selection of items from the Academy Archives:  artifacts from John and Sarah Phillips, a sword presented by John Phillips to his cousin  Lt. Josiah Gilman, a silver tray presented to Prof. George Albert Wentworth on his retirement in 1905, a cane for the Principal that students had made from the ruins of the Second Academy Building destroyed by fire in 1870, a miniature baseball bat won in 1935 by the recipient of the  Dana Wingate Baseball Trophy, a leather football helmet worn by Herbert Greenleaf Noyes PEA 1917, a scrapbook maintained by Donald B. Straub PEA 1924, Daniel Webster’s razor, two trophies with a story to tell, and a ring and candlestick that belonged to Lewis Cass, PEA 1792.

Items in the three sections of the display case in the lobby are being changed every week so that more items can be shown.  This case will contain items either from one of our special collections or from the Academy Archives.  Displayed right now are some handwriting exercises from the early years of the Academy, as well as some examples of student Math workbooks from 1792 to 1819.

Many of these unusual things can’t be worked into any other exhibits very easily, so from time to time it’s fun to just take them out and give people a chance to see them.