In celebration of Hispanic Heritage Month (September 15th-October 15th), this week’s blog post, highlights a selection of recent nonfiction and fiction titles by Latinx authors available in both our print and ebook collections. Next week we’ll feature films from our streaming collections that tell stories of the Hispanic American and Latinx experience.

How to Borrow Print and Ebooks
Students, faculty and staff can borrow print titles using the Library’s Curbside Pickup service.  Watch this quick video for directions or contact us for assistance.  For ebooks, use the view ebook button in the Library Catalog to “borrow” the book to read online or on a mobile device.  A PEA username and password is required for ebook access.

Tales from la Vida: A Latinx Comics Anthology by Frederick Luis Aldama (available in print)
“Bringing together more than eighty contributions by extraordinary Latinx creators…..Tales from la Vida showcases the huge variety of styles and worldviews of today’s Latinx comic book and visual creators.” – from the publisher

Watch a video about the Tales from La Vida exhibit that was on view at the Ohio State University’s Billy Ireland Cartoon Library & Museum in 2019.

A Long Petal of the Sea by Isabel Allende (available in print)
Award-winning author Isabel Allende’s most recent novel “follows two young people as they flee the aftermath of the Spanish Civil War in search of a place to call home.”

Allende is author of more than 20 novels translated in over 35 languages and was  awarded the National Book Foundation Medal for Distinguished Contribution to American Letters in 2018.  Browse a list of additional works by Allende in the Library Catalog.

Dominicana  by Angie Cruz (available in print)
Shortlisted for the 2020 Women’s Prize for Fiction “Fifteen-year-old Ana Cancion never dreamed of moving to America, the way the girls she grew up with in the Dominican countryside did. But when Juan Ruiz proposes and promises to take her to New York City, she has to say yes. It doesn’t matter that he is twice her age, that there is no love between them. Their marriage is an opportunity for her entire close-knit family to eventually immigrate…In bright, musical prose that reflects the energy of New York City, Angie Cruz’s Dominicana is a vital portrait of the immigrant experience and the timeless coming-of-age story of a young woman finding her voice in the world.” – from the publisher

In the Dream House: A Memoir by Carmen Maria Machado (print and e-book available)
Winner of a 2020 Lambda Literary Award for LGBTQ nonfiction,  “In the Dream House is Carmen Maria Machado’s engrossing and wildly innovative account of a relationship gone bad, and a bold dissection of the mechanisms and cultural representations of psychological abuse. Tracing the full arc of a harrowing relationship with a charismatic but volatile woman, Machado struggles to make sense of how what happened to her shaped the person she was becoming.” – from the publisher

Ordinary Girls: A Memoir by Jaquira Díaz (print and ebook available)
Winner of the Whiting Award in NonFiction and a 2020 Lambda Literary Awards finalist, Díaz’s debut memoir tells the story of “her challenging girlhood and triumphant coming of age. While growing up in housing projects in Puerto Rico and Miami Beach, Díaz found herself caught between extremes. As her family split apart and her mother battled schizophrenia, she was supported by the love of her friends. As she longed for a family and home, her life was upended by violence. As she celebrated her Puerto Rican culture, she couldn’t find support for her burgeoning sexual identity. From her own struggles with depression and sexual assault to Puerto Rico’s history of colonialism, every page of Ordinary Girls vibrates with music and lyricism.” -from the publisher 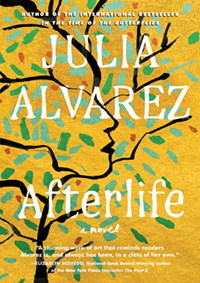 Afterlife: a Novel by Julia Alvarez (print and ebook available)
“A literature professor tries to rediscover who she is after the sudden death of her husband, even as a series of family and political jolts force her to ask what we owe those in crisis in our families, biological or otherwise”-from the publisher.

Clap When You Land by Elizabeth Acevedo (available as an ebook or audiobook)
In her most recent work, Acevedo “writes about the devastation of loss, the difficulty of forgiveness, and the bittersweet bonds that shape our lives. Camino Rios lives for the summers when her father visits her in the Dominican Republic. But this time, on the day when his plane is supposed to land, Camino arrives at the airport to see crowds of crying people… In New York City, Yahaira Rios is called to the principal’s office, where her mother is waiting to tell her that her father, her hero, has died in a plane crash. Separated by distance–and Papi’s secrets–the two girls are forced to face a new reality in which their father is dead and their lives are forever altered. And then, when it seems like they’ve lost everything of their father, they learn of each other.” — from publisher

We Unleash the Merciless Storm by Tehlor Kay Mejia (ebook available)
“In this nail-biting sequel to Tehlor Kay Mejia’s critically acclaimed fantasy novel We Set the Dark on Fire, La Voz operative Carmen is forced to choose between the girl she loves and the success of the rebellion she’s devoted her life to. Perfect for fans of The Handmaid’s Tale and Anna-Marie McLemore.” – from the publisher

Gods of Jade and Shadow by Silvia Moreno-Garcia (ebook available)
“The Mayan God of Death sends a young woman on a harrowing, life-changing journey in this dark fairy tale inspired by Mexican folklore.” — from the publisher